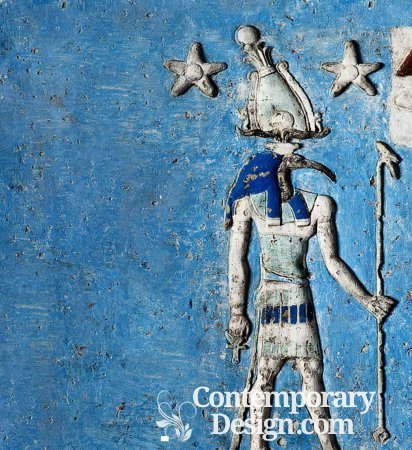 It is said
that necessity is the mother of invention, but so too is desire. The
Ancient Egyptians loved the colour blue. It was the shade associated with
Amun-Ra, the king of their gods. It symbolised the waters of the Nile, life,
rebirth and creation. The tombs of the pharaohs were filled with carved hunks
of turquoise and lapis lazuli, and everything from scarab-beetle statues to
papyrus scrolls were dyed to match the sky and sea. For this dyeing process,
the Egyptians could use azurite, a naturally occurring copper carbonate mineral
that was either coarsely ground and mixed with a binding agent to make dark
blue pigment, or finely ground to make a pale one. The problem was that
deposits of azurite were scarce and were mostly found in northern Europe (a
region that, to the Ancient Egyptians, must have seemed as distant as outer
space). So, around two- and-a-half thousand years before the birth of Christ,
they discovered a way of manufacturing an alternative blue: the first man-made
pigment.

The recipe for Egyptian blue, as it is now known, is as
precise as that for the perfect martini. You need to mix together one part
copper oxide, one part lime and four parts quartz sand (silica). This then
needs to be fired at between 850 and 1,000 degrees Celsius – any hotter or
cooler and the chemical reaction doesn’t work. Opaque, brittle blue crystals,
ranging in hue from a light sky blue to midnight, emerge. Once finely milled
into coloured dust, these pigments can be made into a tempera glaze and
slathered onto pots and paintings, such as the murals in wealthy official
Nebamun’s tomb-chapel at Thebes, now on display at the British Museum. So
enamoured were the ancients with this colour that archaeologists have unearthed
countless pans, bowls and mortars used in the making of it, as well as cakes of
semi-processed blue, at sites all over the Mediterranean.

But, like dogs, every blue has its day. Around 800AD,
Egyptian blue’s popularity began to wane (not completely, though –
archaeologists have found examples of the colour’s use dating from as late as
the 16th century). Part of this decline was due to the ascendency of other
blues, such as indigo. But it also coincided with a fundamental shift in the
idea of preciousness. Medieval painters preferred gold to communicate wealth;
Renaissance painters favoured ultramarine. Both pigments were costly, and both
came from the earth itself: a far cry from the proto-industrially produced Egyptian
blue. As time passed, the value placed on the production of the Egyptians’
favourite colour decreased. The way was there; the will was not.