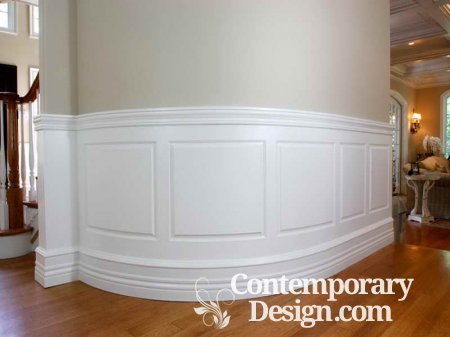 A
\’wainscot\’ was therefore a board of riven (and laterquarter-sawn) oak,
and wainscoting was the panelling made from it. The reason that wainscot was
preferred to home-grown oak for this role, especially in Holland and Great
Britain, was that it was a far superior product. Wainscot oak came from large,
slow-grown forest trees, and produced boards that were knot-free, low intannin,
light in weight, and easy to work with. They were also dimensionally stable.
During the 18th century, oak wainscot was almost entirely superseded for
panelling in Europe by softwoods (mainly Scots pine and Norway spruce), but the
name stuck:

\’The term
wainscoting, as applied to the lining of walls, originated in a species of
foreign oak of the same name, used for that purpose; and although that has long
been superseded by the introduction of fir timber, the term has been continued
notwithstanding the change of material\’. 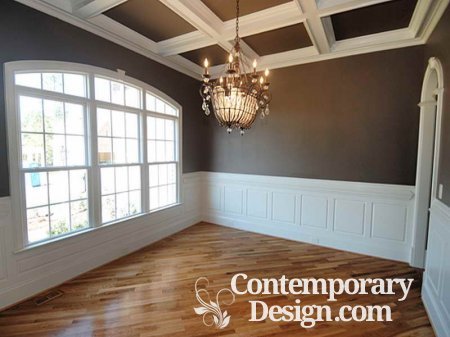 Also in the
18th century, the style of panelling changed from a floor-to-ceiling covering
to one in which only the lower part of the wall was covered. Hence wainscot or
wainscoting became a panelling style applied to the lower 90 to 150cm (3
to 5ft) of an interiorwall, below thedado railor chair
rail, and above thebaseboardor skirting board.It is
traditionally constructed fromtongue-and-grooveboards, though
bead-board or decorative panels, such as a woodendoormight have,
are also common. New manufacturing techniques are capable of milling large
panels from one sheet, reducing seams, caulking, and expansion/contraction
cracks that have plagued traditional construction. Wainscoting may also refer
to other materials used in a similar fashion.

The
original purpose of wainscoting was to cover the lower part of walls, which, in
houses constructed with poor or non-existentdamp-proof courses, are often
affected by rising dampness.Its purpose is now decorative.