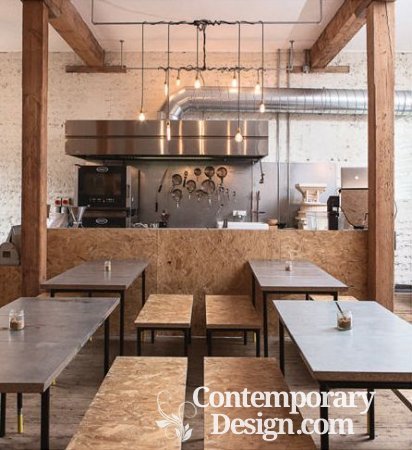 Brighton-basedrestaurant Silo\’s ecological philosophy extends from its food to its furniture.

Brighton\’s
new zero-waste restaurant, Silo, has an interior that\’s as carefully considered
as its menu. The venue is the brainchild of Douglas McMaster, who takes a
hands-on approach to preparing food: rolling oats, baking bread, making butter
and brewing beer. Carcasses of meat are bought in from local farmers, fish comes
from Catchbox (a cooperative that supports small-scale fishermen) and food scraps
go straight in the compost. \”We\’re trying to create a pre-industrial, ecologically
sound food system,\” says McMaster, who also uses plants and wild, foraged
ingredients in his cooking.

Husband-and-wife
design team Eliza Fricker and Steve Baines worked with McMasters to create a
‘pure, raw, undone’ interior for the restaurant. The duo
used recycled and repurposed materials, including school desks from Freegle, an
organization through which people can give away unwanted items. \”The desks
were too low to be tables, but too high to be benches,\” explains Baines.
\”So we chopped down the legs on some of the desks to make them bench
height and welded the parts we\’d removed onto the legs of the others to turn
them into tables. Then we dipped all of the ends in yellow paint.\” The
tabletops are made from offcuts of galvanised steel-covered floor tiles,
marrying Silo\’s eco-aware philosophy with a design-conscious edge.