How do you create the illusion of spaciousness
in an interior? Take inspiration from the clever design tricks used in this
Japanese home.

The Hazukashi family\’s custom – built home stands on a sliver
of land in Kyoto, Japan. The area is densely populated and the narrow plot,
which is squeezed between the neighbours’ properties, presented a challenge in
terms of howto maximise space and light.

The hub of this slender, two-storey open-plan home is a
double-height living area. The family gravitates towards this sociable space;
there is a central dining table at which they eat, work and play. ‘The room is
designed to strengthen the family’s bonds while being functional,’ says
Yoshitaka Kuga of Alts Design Office.

The ancillary areas, which include a snug, the kitchen and
the study, are accessed through openings that mimic the classic gabled roof of
the property.

The archetypal house shapes are designed to evoke memories
of childhood, adding a playful element to the scheme. There is a step up to
each connecting room that creates a simple, effective divide between the
different living zones.

On the upper level of the house, there are two children’s
bedrooms at one end of the building and the master suite and studio at the
opposite end. A cantilevered, galley-style landing links the rooms, with a view
over the space below. Further apertures, which match the internal doorways,
slice through the hallway, diffusing daylight throughout the home. \”We’ve
provided plenty of ventilation and captured the light,\” says Kuga. \”Plus,
we’ve used antique wood finishes to give the home a sense of charm.\” 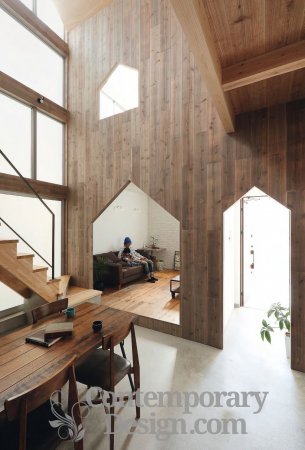 Living area. A bespoke dining table, designed by Alts
Design, is the focal point of this sociable space. House-shaped entrances
replace conventional doorways and offer glimpses of every room

Exterior. The house is built on a narrow plot of land and
squeezed between its neighbours. To combat the lack of square footage, the architects
have built upwards, creating a slender building with a prominent pitched
gable-the house’s trademark. 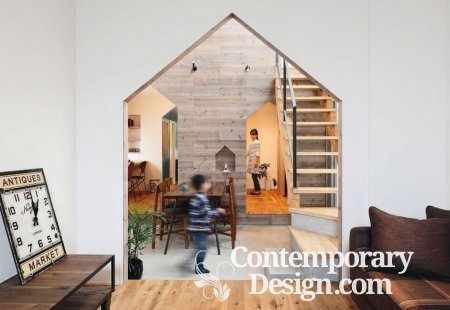 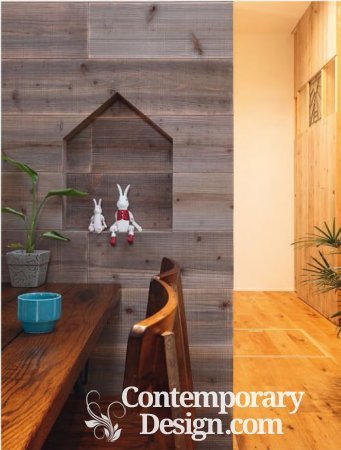 Living area. The external wall of frosted glass behind the staircase allows
sunshine to filter into the house, with open treads blocking as little light as
possible. The step up into the adjoining rooms separates them from the central
space, but also provides extra storage, hidden under the oak floorboards 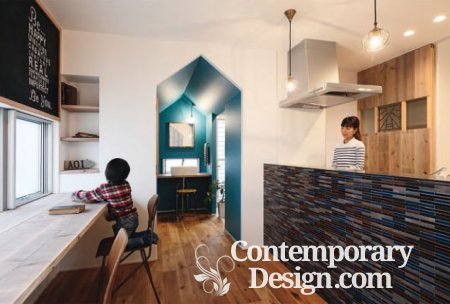 Kitchen. A built-in island clad in modern linear mosaic tiles
separates this space from the study area.
Caged bulb pendants create task lighting above the worktop and the bright blue
walls of the bathroom at the back add colour.

Hallway. A cantilevered walkway connects the two children’s rooms on one side of the house with the master suite on the other. Below, the architects have created a bespoke storage system with open and concealed cabinets. The integrated shelving is clad in oak to match the wall cladding. Spot lights at either end of the hall can be angled to direct light.

How to
maximise light and create space

Yoshitaka Kuga of Alts Design Office reveals how his layout,
material and colour choices helped to enhance the feeling of spaciousness in
the home. I designed an atrium in the middle of the house to make the
most of the available room. It is a multifunctional space – everything happens
here.

Beyond the central living area, the rooms are raised
slightly above floor level, creating a visual sense of entering a new zone. The
steps conceal storage, which can be accessed via trapdoors.

As the house is so close to its neighbours, we limited the
number of external windows on the ground floor to preserve the family’s
privacy. Instead, on one side of the building a wall of frosted glass has been
added that allows plenty of light to filter in while ensuring that only the
staircase is visible from the outside. The kitchen is a galley space. It has
its own entrance, but remains open to the study area to prevent it from feeling
confined – the only division between the rooms is a bespoke, built-in island.
The design enables the couple to keep an eye on their children while cooking.

The aqua-hued feature wall in the bathroom is the boldest
colour in the house and helps to draw the eye towards the far end of the
building.

Caged bulb pendant lights are hung low on cables to produce
pools of brightness around task areas. Other lamps are fixed directly onto the
walls, but can be angled to cast light exactly where it is needed. Solid wood
is used to inject warmth into the scheme. The framework of the building, and
the majority of the bespoke furniture inside, is constructed from oak. Storage
is either camouflaged cleverly or, in the case of the living-room cabinetry,
integrated into the cladding on the wall.