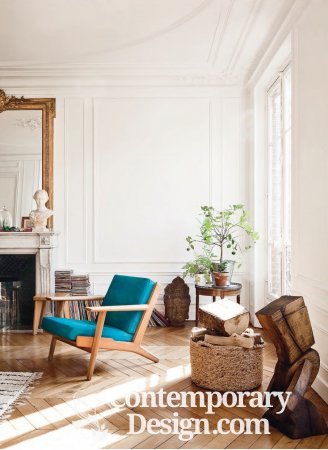 How one
couple turned their 19th-century Parisian apartment into a fun and quirky home that’s
perfect for modern family life.
Patrice
Bastian, owner of footwear brand Feiyue, and his fashion-designer girlfriend
Laetitia Schlumberger fell in love with the ninth arrondissement of Paris when
house­ hunting two years ago. \”There are a lot of young families here and
people who work in creative industries such as movies, production and
events,\” says Patrice. 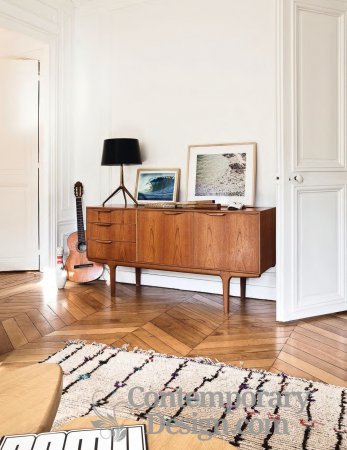 \”The area has a diverse community and lots of
independent shops and restaurants. It’s very cool; living here feels like being
in a village within the city.\” Getting pinpointed the ideal location,
Patrice and Laetitia quickly found their new home, situated on a quiet corner
of the River Seine’s Right Bank. \”It hadn’t been renovated for 20 years
but it had a great bone structure, with original cornicing, wooden floors and
lots of light and space. We were looking for something that we could update in
our own style, so it was perfect,\” says Patrice.
Located on the third floor
of a building that dates from 1800, the 190-square-metre apartment has four
bedrooms, three bathrooms and an open-plan kitchen-dining room. There is
also a living room and a television room: the inclusion of both ensures that
the couple and their four-year-old son, Yume, all have breathing space.

\”Originally
the kitchen/dining area was the worst part of the apartment – it was closed off
and very dark,\” says Patrice. \”Now it’s where we spend most of our
time. We have opened it up and when our friends come over, we gather round the
big table for meals.\” The apartment has a simple but comfortable aesthetic
that fuses classic furniture, such as Eames chairs and a Louis Poulsen lamp,
with pieces handed down through generations or gathered during the eight years
that Patrice spent living in Asia (he met Laetitia at a fashion event in
Shanghai). One of the couple’s most treasured items is a vintage 1960s gramophone
that once belonged to Patrice’s grandfather and that still has a working
turntable. \”I remember using it when I was four or five and I’m still
listening to it today,\” says Patrice. The sculptures and artworks in the
living room also have personal resonance: on display are pieces by Steph Cop,
an artist who was part of the French graffiti movement in the 1980s and is a
good friend of Patrice. \”He’s now renowned for his wooden figurines,
including the Aro piece in our living room,\” adds Patrice.

Since Yume
was born, the couple have made a conscious effort to work less and relax more.
\”We try not to be workaholics. When we’re at home, we forget the computer
and the phone and focus on family time,\” says Patrice. \”We play with
Yume and then once he is in bed, we sit by the fire together reading and
listening to music.\” Patrice also likes to sit by the window and admire
the views of the city from the main bedroom and living room, which both lead
out to a balcony. \”The apartment sits between a garden and a courtyard, so
it’s very quiet – all you can hear is the sound of birds,\” says Patrice.
\”Even though we are in the heart of Paris, it sometimes feels as if we’re
living in the countryside.\” 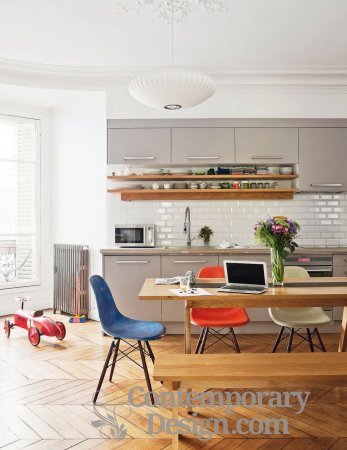 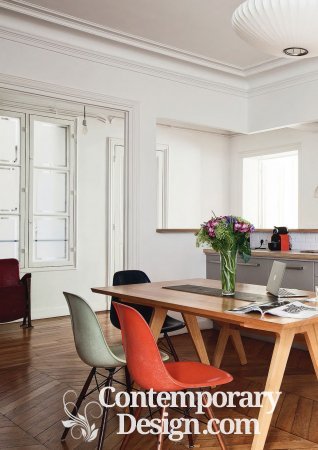 Kitchen. Simple
kitchen cabinets in pale grey line one wall, the metro-style tiles add texture to
the white backdrop. A large table and
benches by the Hansen Family sit at the heart of this open-plan space. Eames
chairs inject colour into the otherwise neutral scheme. 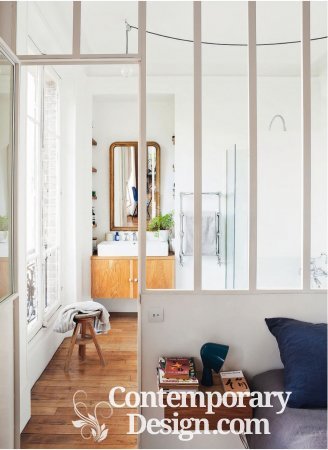 Bedroom. The
classic scheme of white walls and wood continues in the en suite. An Eames
rocker draped in a sheepskin is at the foot of the bed. The mirror was in the house
when the couple moved in, and a friend unearthed the rug in Morocco.